Download Hunt Royale MOD APK Unlimited Money. This is the modded version of the Hunt Royale Android game. Download and install this game to become a talented hunter, accompany other teammates to hunt down the most dangerous monsters.

Hunt Royale is a new action game published by BoomBit Games for android devices. This publisher has been winning the heart of gamers with popular games such as Driving School Simulator, Ramp Car Jumping, and Tiny Gladiators. Recently, they published this new PVE game called Hunt Royale.

Hunt Royale is an interesting PVE game where players team up to hunt down the most dangerous monsters. This game is available on Google Play and can be installed freely on any android device. Although this game was recently launched, its game has attracted more than 1 million downloads on Google Play. It comes with impressive gameplay featuring over 30 characters, several levels, and special weapons. On this page, you can download Hunt Royale modded version without hassle.

The world you are about to explore is full of danger and ferocious monsters. The only way you can survive is to hunt these monsters, combat and defeat several enemies. Amid those dangers, you have to team up with other players and fight together to defeat these precarious creatures. Survive every danger and become a legendary monster hunter!

Hunt Royale has up to 4 modes available to play, including classic mode, Co-op, Boss Hunt, and Bounty Hunter. Each mode comes with different challenges to overcome, this makes each mode incomparable to others.

The classic mode is time-sensitive, you will join the battle to hunt monsters for a precise amount of time. The battle will be over when the last survivor is determined, or when time is up. Like most forms of scoring, killing monsters brings points. The winner will be determined by the amount (number of monsters killed). Killing stronger monsters attracts more scores.

Next is the Co-op mode. In this mode, players come together to fight waves of zombies. There are fewer players while the amount of monsters doesn’t decrease which makes it a little bit difficult to win in this mode.

The third mode is Boss Hunt. Where groups of 4 players will fight together and conquer the boss to complete the hunt. Bosses are often very powerful and possess great fighting skills.

The final mode is Bounty Hunting where you fight with the other 9 players. This is arguably the most competitive mode, show off your fighting skills to survive to the end!

Hunt Royale comes with a diverse character system, with more than 30 characters. Each character comes with special abilities and possesses individual stats. You can see the details of these stats by tapping on that character.

If you are looking for a game to dispel boredom in your spare time, we recommend Hunt Royale MOD APK. In addition, this modded version comes with lots of money which you can use to upgrade your characters and buy new weapons. Click on Get Download Links to access the download page. 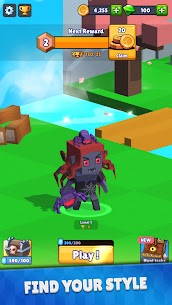 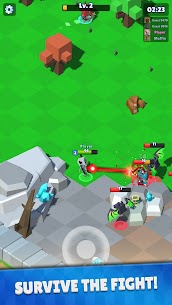 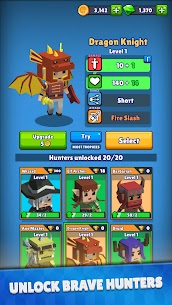 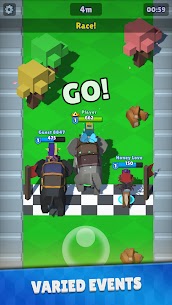