Strategy games have become popular in recent years thanks to the birth of Clash of Clans, Clash Royale, and other popular strategy games that brought this category back to life again. Today millions of people find interest in Strategy games specifically on mobiles due to the fun it gives and engaging battle gameplay. Been a fan of this genre, you need to add Art of War Legions to your game collection not because it’s just an ordinary strategy game. But for its exponential gameplay that comes with challenging levels that keep you engaged.

More About Art of War Legions

Art of War Legions is a funny game with a huge amount of spectacular battles. If you are the type of gamer who’s interest is in strategies and gameplay, this one is for you! Speaking of its gameplay, Art of War Legions is similar to Clash Royale and now becoming one of the most popular in its genre with over 10 million installs on Google play alone and counting.

In this game, you will be in command, you lead a large force of tiny armies to battle and conquer enemy troops to become victorious. Each level in this game comes with various challenges which require many factors to win. You have to devise strategies to fulfill every task that comes forth your way. At first, this game challenges you with a simple task that will surely get more tedious as you progress in the game. If you’ve been conversant with war games, you should know that wars have arts that you need to master and deploy to your advantage.

Many Game Modes – Games with more than one mode are always interesting and fun to play because you can switch to other modes when you find the current mode boring. Art of War Legions Apk is no less, there are up to three different modes in this game. These modes are Bonus Mission Mode, Crossing Modes, and Expedition Mode.

Hero collection – In Art of War Legions, it’s not just about the number of armies you take to the battle, but how strong and capable they are. The number does not matter, you have to inspect the type of armies and strategize how to use them in battle. One of the strategies is the use of Heros, they give you a better chance of winning because they possess special powers. You can only use heroes for a limited time in battles, you need to wait for them to recover to use them again.

Upgrades – Like any other strategy game, you can also upgrade your armies and heroes in Art of War: Legions. Heroes have a separate upgrade interface where you can upgrade their stats manually. Your troops can only be upgraded when you are preparing for battle. The coins and Gems in Art of War Legions Mod Apk will help you greatly in upgrading your heroes and troops.

Simplistic control design – Strategy games don’t come with complex controls, unlike action games, the same applies to Art of War Legions Mod Apk. It comes with a very simple controls scheme, all you have to do is to tap the “fight” button at the lower middle part of the screen. In addition, you are free to move your troops in different directions before the battle to find the perfect spot.

Graphics – The game comes with an oddly satisfying 3D graphic, not too attractive but the color scheme is satisfying. Also, the view angle is upward similar to Clash of Clans. Each troop is designed with fun in mind. You might think of them like Legos, but they are the brave warrior fighting for your course.

Get the best out of this game by downloading Art of War Legions Mod Apk, the modded version with Vip Unlocked feature and Immortal for your troops to stay alive. Click on “Get Download Links” to access the free download link for this game! 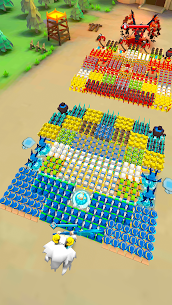 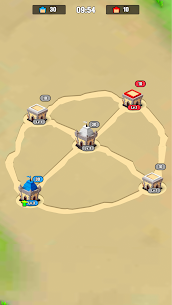 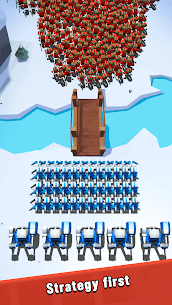 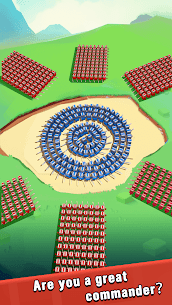